Everest Gymnastics employs more than a dozen talented coaches and administrators. These dedicated professionals each take a personal approach to nurturing the talents of the school’s future athletes. In the following brief post, three special members of the EG family are highlighted.

Originally from Sweden, Coach Anna is a fitness enthusiast who runs her own health and wellness business. Anna has been with Everest Gymnastics since 2006 after moving to the United States from Stockholm. Her favorite thing about coaching the Compulsory Team is the time she gets to spend with her students and the bonds she has forged over the years. Coach Anna finds inspiration in every day and claims her favorite moments are not necessarily on the mat, but any time she has an opportunity to be with Han, Chen, and the many students she is blessed to mentor.

Signing on with Everest in 2005, Coach Lori is the school’s preschool coordinator. She is an accomplished athlete herself who takes pride in watching young students achieve victories both on and off the training floor. Coach Lori’s voice can be heard echoing through Everest Gymnastics as she imparts her favorite bit of wisdom upon her students, “It’s nice to be important, but it’s important to be nice.” This sentiment aligns perfectly with the core values of Everest Gymnastics and has made Coach Lori a beloved teacher to students and parents alike. 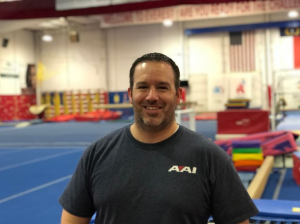 A veteran competition gymnast, Coach Matt brings more than two decades of coaching experience to Everest Gymnastics. Matt says that after a lifetime of being involved in gymnastics, he still experiences the same excitement he did in the early days while helping his younger students. Matt’s favorite skill to teach is the bars. Although he spends most of his time at Everest Gymnastics, Matt is a proud husband and father and can be found on his off days taking his daughter to diving class or at gymnastics with his son, who is following in his father’s footsteps.

Everest Gymnastics is on a mission to provide the most comprehensive gymnastics training in North Carolina. From beginner to advanced, each class is carefully designed to meet to the needs of growing athletes in a safe, nurturing, and supportive environment. Head coaches Qi Han and Yiwen Chen opened their first location in Huntersville in 2004. This expansive facility continues to advance the skills of gymnasts from preschool to the Olympics.

In 2018, Everest Gymnastics opened the doors to an even larger training center in Cornelius. At 32,000 square feet, and featuring an impressive selection of USAG Certified equipment and a highly-skilled staff, this well-thought-out facility underscores the tireless dedication of both Han and Chen and their commitment to excellence.

Everest Gymnastics is pleased to offer recreation classes and regular opportunities for new athletes to get to know gymnastics. Both locations host events that include skills clinics, summer camps, after-school care, and more.